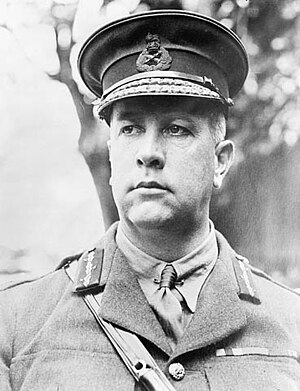 Sir Arthur William Currie was a military leader for Canada in World War I and "is generally considered to be among the most capable commanders of the Western Front, and one of the finest commanders in Canadian military history."

The short answer is no.

Sir Arthur's grandfather John Corrigan fled religious strife in Ireland by emigrating to Canada in 1838, converting from Catholicism to Methodism, and changing his name to "Curry". (Arthur changed the spelling of his last name from "Curry" to "Currie" at age 22 in 1897.)

John Corrigan settled in Middlesex, Ontario upon arriving in Canada, and his children and grandchildren mostly remained there. Michael's mother's father's father's family was from that area, so it's possible there is some other connection, but not via the last name.

Michael's last name originates from John Currie, a Scot born in Galashiels, Scotland. His family business was operating textile machinery, and so he immigrated to Canada, arriving 8 June 1883, to work the wollen mills of Almonte, Ontario. His youngest son Alex settled in Winnipeg, and Alex's son Jack settled in Thunder Bay. Jack's son Ron remained in Thunder Bay, and had Michael.

Arthur Currie was born to William Garner Curry and Jane Patterson on 5 December 1875 at farm near the hamlet of Napperton, Ontario, just west of Strathroy. He was the third in a family of eight children and grew up on the homestead of his paternal grandparents, John Corrigan and Jane Garner. Currie's grandparents had emigrated from Ireland in 1838 to escape religious strife, and upon their arrival in Canada they had converted from Catholicism and Anglicanism to Methodism, changing the family name from Corrigan to Curry. Arthur Currie modified the spelling of his surname from Curry to Currie in 1897.
— Wikipedia

Thus, Michael's patrilinial roots in Canada date from 1883 via Scotland, whereas Sir Arthur's date from 1838 via Ireland. (45 years earlier)

Because John Corrigan settled in Strathroy-Caradoc, in Middlesex county, it's possible that some of his descendants married into the other side of Michael's family, via William Newman, who also lived in Middlesex. William Newman's wife was Mary Hillier - was she the grandchild of John Corrigan? It seems no. However, it's possible that the Newman and Hillier families interacted with the "Curry" family while they lived in the same rural community of Middlesex in the decades from 1838 to when Currie left for Victoria, BC in May 1894, and when William Newman left for Winnipeg in 1906.

1838 - John and his wife emigrate from Ireland to escape religious strife, and upon their arrival in Canada they had converted from Catholicism and Anglicanism to Methodism, changing the family name from Corrigan to Curry.

1897 - Arthur changes his family name from Curry to Currie

October 1914 - Currie sails overseas with his brigade, spending the winter training in England

22 April 1915 - Germans use poison gas on Currie's troops at Ypres. Following the battle, Currie was promoted to Major-General and given command of the entire First Canadian Division.